When I was younger… (now get off my lawn) … I used to have band posters, stickers, and pictures of people and places plastered over almost every inch of my room. From the doors ♫ to the windows, to the wall ♫ on my mirror and even my ceiling it was a pretty straightforward expression of who I was and what I was into. I have not really been nearly as creative in my decorating since. When I settle down and buy a place I think that might be the first thing I change.

Anyways, I know most developers and data scientists on their own laptops have the NASCAR like sticker set on their lids. I was always a little reluctant for some reason. One part I did not want to waste the stickers I put effort into collecting since it seems like I will always be trying to get new hardware. I think the other side basically revolves around wanting to appear at least somewhat professional in my corporate job. Well I travel with my Chromebook frequently and is starting to show some wear from all of that. Somehow that feels worse than it having stickers. I also recently got a bunch of h2o.ai stickers from H2O World New York. So I thought this would be a nice way to jazz it back up and have some fun with it. 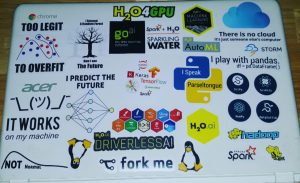 Figure it is worth capturing while it looks this nice. Who knows how it’ll hold up since I have more travel on my calendar over the rest of the year. Nice problem to have though.

It may not be as completely expressive to all of my facets as my room was when I was younger, but I think it is a fun and fair representation of a lot of what I do in technology, big data, and data science.

This site uses Akismet to reduce spam. Learn how your comment data is processed.

Who else is waiting for the coinbase listing

Remember—Even if you’re fully vaccinated, the CDC still recommends you continue that epic #StarTrek binge you started during quarantine. 📺🖖

What video player is @nvidia using for @NVIDIAGTC that you can't @Chromecast it? I'm thankful @Xbox has a browser so I can watch from my TV instead of computer.

Picard levity tip: Before lifting your teacup off a small dish, give the command, "Prepare for saucer separation."